Alfred Jacob Miller was one of the first artists to document in his work the adventures of mountain men and Native Americans in the American West in the early nineteenth century. Miller was an American artist who attended the fashionable European school Ecole des Beaux-Arts in 1834. He returned to Baltimore, Maryland in 1836 and soon after he relocated his art studio to New Orleans. It was in New Orleans where Scottish nobleman, Capt. William Drummond Stewart, recently retired from the British Army, visited with Miller. 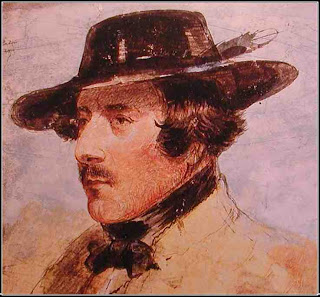 Steward, who sought his own adventure in the American West, asked Miller to accompany him on an expedition in 1837. Steward wanted the artist to document one of the American frontier’s most exciting gatherings of white and native people; the annual Fur Trade Rendezvous, which in 1837 was located on the Green River in present day western Wyoming. Subsequently, Miller became famous for his depictions of western inhabitants in the early nineteenth century. Like Karl Bodmer, and George Catlin before him, Miller captured in his paintings a realistic yet romantic vision of Mountain men and Native Americans interacting at the Rendezvous on the Green River. There are very few journals or diaries of participants who attended the 1837 Rendezvous; Miller’s sketches and paintings are a valuable contribution that document one of the last Fur Trade gatherings in the American history.

In the spring of 1837, the Scottish nobleman, and his new artist friend, along with an entourage of assorted people traveled West in a fur trade supply caravan led by Thomas Fitzpatrick, a part owner in the American Fur Company, and a trapper/trader who had been attending the Fur Trade Rendezvous since it’s inception in 1825 by William Ashley. 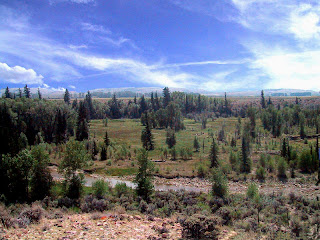 Recent photograph of the First Rendezvous site on the Green River


Ashley initiated the Rendezvous as a once a year gathering place to supply his fur trappers with goods in return for the trapper’s furs. It was financially expedient to haul supplies to their traders in the West, thereby making it possible for the trappers to avoid the long trip to St. Louis to dispose of their furs.
At the first Rendezvous on the Green River, Ashley sold supplies to 120 men. Some were independent trappers and others belonged to the Hudson Bay Company, who in 1825 dominated the fur industry in the Pacific Northwest.

The Fitzpatrick supply train arrived on the Green River in July 1837, where the found a large gathering of Fur traders and Native Americans looking to trade their furs for Ashley’s supplies. 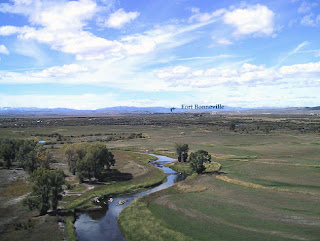 Recent Photograph of 1837 Rendezvous site on Horse Creek, a branch of the Green River 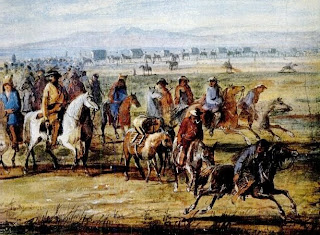 The gathering was large and the partying by both white and Indian went on for days. Although Fitzpatrick did not include whiskey among these supplies, the drink was in abundance; the gathering on the Green was perhaps one of the wildest of any previous rendezvous. One trapper recorded that when he arrived at the Rendezvous,

Here we found the hunting parties all assembled waiting for the arrival of supplies from the States. Here presented what might be termed a mixed multitude. The whites were chiefly Americans and Canadian French with some Dutch, Scotch, Irish, English, halfbreed, and full blood Indians, of nearly every tribe in the Rocky Mountains. Some were gambling at cards some playing the Indian game of hand and other horse racing while here and there could be seen small groups collected under shady trees relating the events of the past year all in good spirits and health for sickness is a stranger seldom met with in these regions.

The atmosphere provided artist Jacob Miller with wonderful sketches that he later made into paintings, his medium was usually watercolor. 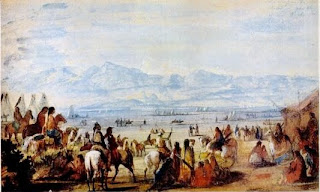 Miller's watercolor of the 1837 Rendezvous 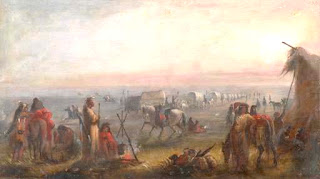 Breaking up camp at Sunrise.

Miller's painting is a reflection of his thought. While traveling with the Fitzpatrick caravan He wrote,


At four o'clock in the morning, it is the duty of the last men on guard to loosen the horses from their pickets, in order to range and feed. At daylight, everybody is up--our provisors are busy with preparations for breakfast;--tents and lodges are collapsed, suddenly thrown down, wrapped up, and bundled into the wagons.

If the sun is 20 minutes above the horizon when our breakfast is finished, we conceive that he has a reproachful look. By this time the horses are driven in, and each man hurries after his own, saddles or harnesses him, and the train puts itself enroute.

At this period, one of the strongest contrasts presents itself, and illustrates in a striking manner the difference between the white and red man.

While all is activity and bustle with the Anglo-Saxon as if he feared that the Rocky Mountains would not wait for him, the Indian lingers to the last moment around the camp fire,--he neither enters into or sympathizes with our diligence, and seems to regret that stern necessity forces him to accept our company for his convoy.

While Miller's experience with Native Americans are depicted in most of his sketches and painting, his impression of the war like nature of the Indian is most stunning. 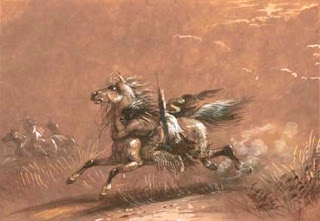 On this eventful morning our caravan, pursuing as usual the even tenor of its way, we descried one of our hunters returning to the camp at full gallop. His speech was to the purpose, "Injins all about--that will be some raising of h'ar as sure as shootin." On his heels followed other confirming this. At this juncture, it would have been a good study(if the mater had not been so serious) to watch the countenances of the different men. The staid indifference of the old trappers ready for any emergency, the greenhorns(braggarts of the camp fire) pale about the gills and quite chopfallen. No boasting now!. Monsieur Proveau, subleader, with a corpus round as a porpoise, revolving in his mind what was to be done A Problem.

All of us were more or less uncomfortable decidedly, and as sensitive about our scalps as a Chinese concerning his pig-tail que. We were not kept long in suspense. A cloud of dust soon divulging a piratical horde of wretches, painted without regard to harmony of color, coming down on us at top speed,--armed to the teeth, and when they reached us, they commenced riding around in a menacing manner.


One of the most recognized of Miller's painting is "The Trappers Bride." 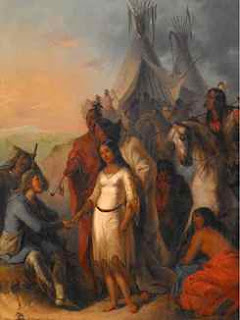 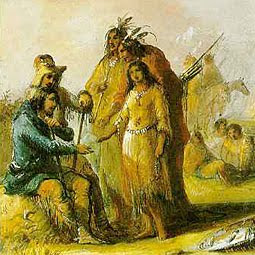 The prices varying in accordance with the circumstances. He (the trapper) is seated with his frined, to the left of the sketch, his hand extended to his promised wife, supported by her father and accompanied by a chief, who holds the calumet, an article indispensable in all grand ceremonies. The price of acquisition, in this case, was $600.00 paid for in the legal tender of this region: Guns, $100.00, Blankets $40.00 each, Red Flannel $20.00 pr. year, Alcohol $64.00 Gal. Tobacco, Beads, etc. at corresponding rates.

A free Trapper(white or half-breed), being ton or upper circle, is a most desirable match, but it is conceded that he is a ruined man after such an investment, the lady running into unheard of extravagances. She wants a dress, horse, gorgeous saddle, trappings, and the deuce know what beside. For this the poor devil trapper sells himself, body and soul, to the Fur Company for a number of years. He traps beaver, hunts the Buffalo and bear, Elk etc. The furs and robes of which the Company credit to his account.