Casting Oklahomans in a Negative Light

So, what do John Steinbeck, Sanora Babb and John Grisham have in common?

All three authors used Oklahoma as a backdrop for their stories of social injustice. By so doing, they helped to recast Oklahoma’s image from the West of Indians, cattle trails, cowboys, and settlers, to the lowest common denominator-- a place of homelessness and despair, where ignorant and incompetent people lived.

Most readers recognize John Steinbeck for one of his most popular books, The Grapes of Wrath , and John Grisham for his numerous books about southern lawyers. Grisham’s most recent book is The Innocent Man, a docu-fiction about a murder in Ada, Oklahoma. Few readers, however, will recognize Sanora Babb or her book, Whose Names are Unknown.

If it was not for extreme bad luck, Sanora Babb’s career as an author could have been as successful as John Steinbeck’s. In 1939, Babb was under contract with Random House for the publication of her manuscript, Whose Names are Unknown, a story about a farm family’s struggle to make a living in Oklahoma and California in the Economic Depression of the 1930s. After Babb signed her contract with Random House, she moved to New York to finish her manuscript and prepare it for publication. However, Babb’s story about the Dunne family, who left their farm and sun scorched land in western Oklahoma, is almost identical to John Steinbeck’s story of the Joads and their trek to California from the eastern Oklahoma town of Sallisaw. Before Babb could finish her manuscript, Viking Press released The Grapes of Wrath. The editor at Random House believed that having two books on the market about Depression Oklahoma was not a financially sound idea; he cancelled Sanora Babb’s publishing contract for Whose Names Are Unknown. The editor did, however, offer Babb a contract and advance on her next novel. John Steinbeck’s The Grapes of Wrath won the Pulitzer Prize for fiction.

Of the two books, Whose Names are Unknown
(finally published by the University of Oklahoma Press, 2006) is the most realistic because the author worked and lived among the people of whom she wrote. 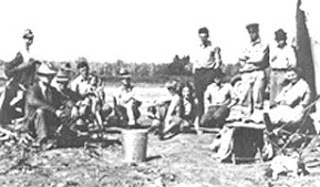 As a worker for the Farm Security Administration, the New Deal agency that helped farmers in the 1930s, Babb chronicled the lives of farm workers who lived in migrant camps in California-- their personal struggles compounded by a lack of food, medical care, and shelter. Much of what Babb saw in the migrant camps was familiar to her; her father was an itinerant who moved his family around Oklahoma, finally settling with her grandfather in a sod house in Eastern Colorado, where they raised broomcorn. Babb also incorporated into her story information from her mother’s letters about the dust storms in western Kansas. 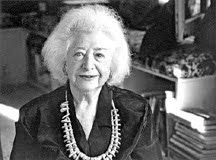 Steinbeck was not from Oklahoma, and many criticize his characterization of the Joad family in The Grapes of Wrath. 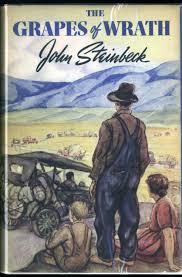 Steinbeck did do his research by visiting Oklahoma and California. And on one trip to the migrant camps in California, Steinbeck met Tom Collins, Sanora Babb’s manager at the Farm Security Administration. Collins borrowed Babb’s notes on the migrants and shared them with Steinbeck. Babb was never sure whether Steinbeck actually read her notes, but it is interesting to speculate.

Both authors in their respective books tell a similar story about a class of people who suffered many deprivations. In The Grapes of Wrath, Steinbeck painted a pretty grim picture of humanity in its most crass condition. Like the Muckrakers of the late nineteenth and early twentieth centuries, Steinbeck condemned the capitalist system that he believed forced some people to suffer on the bottom rung of the economic ladder. Typical of many writers on the left in the 1930s, Steinbeck advocated Socialism and government control of the means of production as an alternative to American Capitalism.

This was also Sanora Babb’s viewpoint, although she did not introduce characters in her book equivalent to Steinbeck’s outspoken Reverend Casy, her subtle descriptions of homelessness, and an economic system that worked against the migrants carefully constructed an argument against the American economic system. It is telling that before Babb started writing her book, she joined the Communist Party. In 1936 she followed like-minded authors to the Soviet Union, where they studied many aspects of the collective communist culture.

As was often the case in economic hard times in the United States, many farmers and industrial workers found Socialism and Communism an acceptable alternative to their perception of a failed American Capitalism. But once the economy started to rebound, freedom of the market place lured most back to the Capitalist system. In Oklahoma, people enjoyed a return to economic prosperity before the rest of the nation because the state was one of the first to receive federal money to build military bases to prepare for America’s entrance into the Second World War.

The American West holds a special place in the minds and hearts of the American people. Many of us grew up watching western adventure on TV and found enjoyable reading in the adventures of mountain men, immigrant wagon trains traveling the Oregon Trail, Indian wars and outlaws. And, as a part of the West, Oklahoma has a colorful history. Indian Territory, in present day Oklahoma, was a favorite hideout for outlaws-- most notable, Belle Starr and the Henry gang. When the federal government started the allotment system and broke up Native American lands, the rest of the Territory was open to white settlement in a series of land runs. Towns sprang up across the Plains and people from all walks of life and from many ethnic backgrounds created “instant” settlements; what wonderful material for any writer to create stories that captivated the American mind. Edna Ferber took up the challenge and wrote Cimarron (1929) around characters and events that mirrored the history of early Oklahoma. Typically the early history of the state is not the history that is most often celebrated. Instead, the Dust Bowl years and John Steinbeck’s characterization of the people as pitiful losers in the fight for a piece of the economic pie is the image presented to the world, an image wrapped up in one word, Okie.

In this year of 2007, Oklahoma is celebrating one hundred years of statehood. There are many, many different celebrations planned throughout the year. One such celebration is the National Endowment for the Humanities’ (NEH) Big Read. The Pioneer Library System in Central Oklahoma received a generous grant from NEH for the Big Read program-- the goal is to interest people in reading some of the classic books about the American character. It is up to the grant recipients to pick from a list of award winning books the selection on which their community will focus. The program sponsors at the Pioneer Library decided to build their Big Read program around John Steinbeck’s The Grapes of Wrath. So once again, the Joad family, in all their splendor, is introduced to a new generation of people who have not yet had the opportunity to learn what is meant to be an Okie, and all that the term denotes.

John Steinbeck and Sanora Babb do not have a monopoly on casting the citizens of Oklahoma in a negative light. John Grisham’s An Innocent Man characterizes county officials, prosecutors, judges, leading lawyers and the Oklahoma State Bureau of Investigation’s forensic lab employees as incompetent corrupt boobs, so corrupt that they orchestrated a guilty verdict for an innocent man, who sat on death row for over ten years before a diligent lawyer uncovered the truth.

Grisham’s writing of the story is true to his other books about southern lawyers with a less than favorable characterization of southern people.

It is interesting that casting Oklahoma as a southern state seems to bring out the more negative images. The sharecroppers who migrated from the South through the state to California in the 1930s, the ones Steinbeck and Babb made into Okies, are not seen as a part of the West. Oklahoma as part of the West is seen in Edna Ferber’s Cimarron, and an even more positive image in Lynn Riggs book, Green Grow the Lilac, (1931) which became the basis for Rogers and Hammerstein’s musical Oklahoma. (Opened on Broadway in 1943)

These two cultural icons, The Grapes of Wrath and Oklahoma, present two contrasting images of the state and its people. In some sort of schizophrenic way, Oklahomans seem to identify with both images. In reality, Oklahomans are a very diverse group of people whose ancestors immigrated into the state from all over the country. This migration of Native American, African American and European Americans culminated into an interesting rich cultural mosaic. It is too bad that writers find it necessary to work out their political views on paper with Oklahoma as a backdrop.
Posted by sue schrems, Ph.D. at 2:21 PM