Stagecoach Mary, an ex-slave who found freedom and eventually employment at an Ursuline convent in Ohio, has become a significant woman in American history. Books and articles assign all sorts of deeds to her, which run the gamut from fighting for woman suffrage to shootouts in the streets of small Montana towns. The real story of Mary Fields is not as glamorous but it is still interesting and she does have a place in history along side the Catholic sisters with whom she lived and worked.

In Montana folklore, Mary Fields is “Stagecoach Mary,” one of the toughest women in Montana Territory. Descriptions of Fields often have it that “she was a tart-tongued, gun-toting, hard-drinking, cigar-and-pipe smoking, 6 foot, 200 pound black woman who was tough enough to take on any two men.” 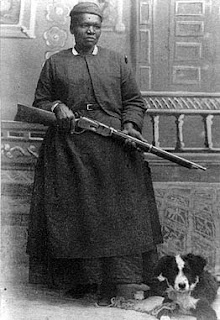 Mary Fields may have been all those things but foremost she was a loyal friend to Mother Amadeus Dunne, eventually following the mother superior to Montana in the 1880s.

Mary Fields was born into slavery in 1832, living on a plantation in Tennessee. It is not clear how or when she arrived in Ohio and made her way to the Ursuline Convent. But once at the convent, she found work and security, and grew close to the sisters and the children under the Ursuline’s care. She was especially fond of Mother Amadeus.

When the Catholics started building missions in Montana to serve Native Americans on the reservations, the Jesuits asked the Catholic sisters to help build mission schools. They asked Mother Amadeus to supervise the sisters efforts in the West. She arrived with five Ursuline Nuns in Miles City, Montana in 1884.


The sisters were the first from the Ursuline convent in Toledo, Ohio to leave the comfort and sanctity of their convent home to establish mission schools on the Cheyenne, Crow, Blackfoot and Gros Ventre-Assiniboine Reservation in central and eastern Montana. The sisters had little to work with and endured harsh Montana winters to accomplish their goals, often doing so at the risk of their health. Mother Amadeus came down with pneumonia while working to establish St. Peter’s Mission schools in central Montana. 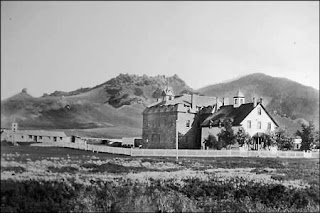 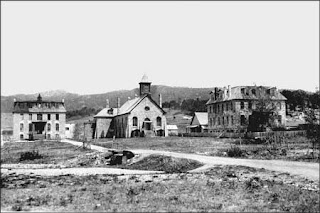 St. Paul's mission and schools among the Gros Ventre-Assiiniboine

After Mother Amadeus recovered from pneumonia, she found work for Fields as the mission freighter and in the mission laundry. The Jesuits, who established St. Peter’s Mission, did not appreciate Mary Fields’ explosive temper and did not believe that the black woman set a very good example for the children at the mission. He instructed the sisters to send her away. Unknown to the bishop, Mother Amadeus financed Fields in the restaurant business in nearby Cascade. The mother superior also asked the government to give Fields the mail route, which served the mission. Mary eventually was the U.S. mail coach driver for the Cascade County region, thereby, acquiring the nickname of “Stagecoach” Mary.

The Urslines continued to build their mission schools in Montana. 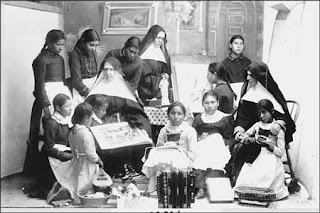 Once the Ursulines finished establishing Indian Mission schools in Montana, Mother Amadeus received permission from Bishop Brondel to establish an Ursuline convent and school in Alaska. The intrepid nun died at the Urusline convent in Seattle, Washington, 1919.