If you have ever been to Flathead Lake Montana in the summer, you know the beauty of the thirty-two mile long lake, especially the eastern shore where the Mission Mountains provide a spectacular backdrop to the crystal blue water. 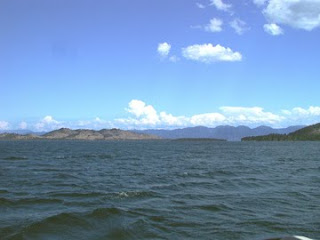 Flathead Lake is fifteen miles wide, Thirty-two miles long, and at its deepest point, 368 ft. deep. It is the largest lake west of the Mississippi River. 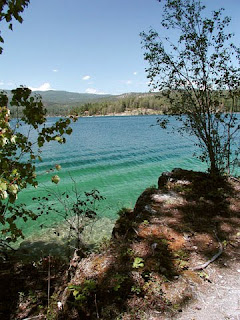 Fur trader David Thompson was the first European to see Flathead Lake. In 1812, while staying at the Hudson Bay Post trading post, Saleesh House, in what is now the Flathead Valley, he explored the region, first going to present day Missoula to look at the area described by Lewis and Clark, and then north through a long wide valley that ended at the southern end of the today’s Flathead Lake.

The Salish people of the Columbia Plateau, traders, and Hudson Bay Company employees dominated the intermountain region until the Jesuits built Catholic missions in the 1840s in present day, Washington, Idaho and Montana. In Montana, the fathers built St. Ignatius Mission at the foot of the Mission Mountains to serve the Kootenai, Pend O’relles and Flathead. (Salish who once lived in the Columbia Plateau. Today known as the Confederated Kootenai Tribes of the Flathead Reservation located in Western Montana.) Flathead Lake was explored and well known to the Salish people. 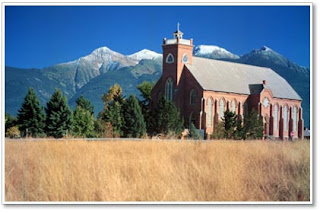 Along the western shore of Flathead Lake rock cliffs ascend out of the water adding a rugged backdrop to this picturesque lake. 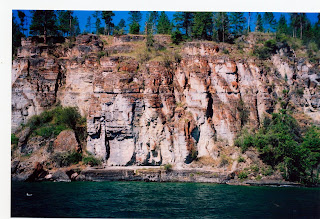 On seven of these rock outcroppings, there are ancient depictions of a native people who once inhabited the Flathead Lake region before the Salish. These pictographs painted on cliffs and petrographs carved into basalt that line the lakes and rivers of western Montana, and the Pacific Northwest, provide an artistic record of approximately three thousand of years of Native American culture.

Ethnologists, who have studied rock carvings, believe that the native people drew pictures during puberty rituals, vision quests, and other religious activities. The Salish in western Montana were probably the first to notice the pictures painted on the cliffs along Flathead Lake, which today can only be viewed from the water. Oral history of the people indicate that they established the rock cliff pictographs as sacred places; it was common for the people to add their own art to the already existing pictures. In western Montana, the paintings seem to be mainly related to the vision quest; men and women, who were seeking super natural power would go to the rock cliffs and pray for a guardian spirit to give them these powers. The spirit would reveal itself through a vision, which could be in the form of an animal, celestial object or mythical being. 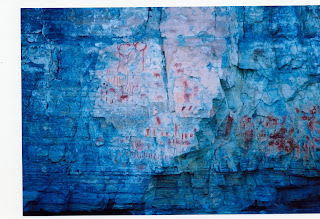 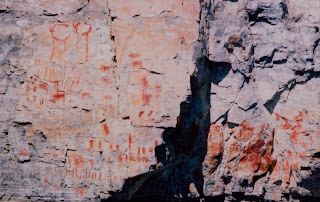 Today, the location of the pictographs on the western shore of Flathead Lake is known as the Painted Rocks. There are actually two sites at opposite ends of the high sheer cliff. The paintings show painted deer, bison, tally marks and geometric figures. The most common design elements in rock art in western Montana are tally marks. Ethnographers interpret tally marks as the count of days, people, animals or other objects. The marks can also represent the steps necessary to complete a ritual—the marking off of specific items. 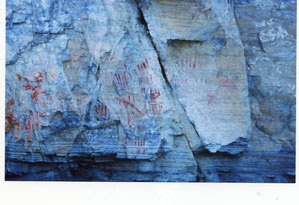 It is remarkable that the paintings have lasted for several thousand of years. Part of the reason is the durability of the paint, which was made from various minerals-- crushed iron oxide (hematite and limonite). From the minerals they created colors ranging from bright vermilion to dull reddish brown. The crushed mineral pigment was mixed with an organic binding agent such as blood, eggs, fat, plant juice or urine. The age of pictographs can also be determined from the earliest photographs taken of the rock art in the early 1900s and comparing those photographs with recent photographs. What is evident is that there is almost no fading of the color in the last one hundred years. Also, certain minerals that form on the rock help to imprint the sketches into the rock itself, thereby preserving the painting for perhaps a longer period of time than the surface painting. It is believed that the pictographs at Painted Rocks are two to three thousands years old and that the latest additions to the paintings were between 1700 and 1900.


Note: Special thanks to my sister-in-law, Arlene Hawk, for taking these picture. Every time we visit my family at their place on Flathead Lake it is always a thrill to cruise the lake and stop by Painted Rocks.
Posted by sue schrems, Ph.D. at 2:05 PM 1 comment: