Evidence of our western heritage is evident to visitors who travel to the American West every year. Many, who travel western highways that follow the Oregon-California and Mormon trails across the Plains and Mountains to the Pacific, or farther south, who travel Route 66 across Oklahoma and the Southwest, view the pioneer experience as depicted in historical sites, museums, and in gas station and restaurant gift shops. But, today a traveler can also get a glimpse of our heritage by never leaving the comfort of their SUV. One can find along the highways and byways of the American West new cultural artifacts that I have coined “Roadside Sculpture, The American West in Bronze.”

I first became aware of Roadside Sculpture a couple of years ago when we drove into Lander, Wyoming on route 287. There at the edge of town was a herd of bronze steers running toward downtown Lander. 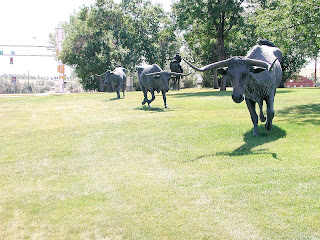 Being new in Lander, finding bronze Texas longhorns running along side of the highway was quite a site. Especially interesting was the drover who sat nonchalant in his saddle not too bothered that his herd was heading into a congested downtown Lander. 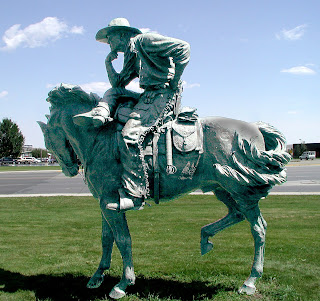 The more than life size sculpture so intrigued us that we stopped and investigated who did such wonderful work, and soon discovered that the bronze cattle drive was in front of the Eagle Bronze Foundry. The Foundry has been in operation in Lander since 1986, and has since cast bronze sculpture for clients in Us, Canada, Japan, Europe, and the Middle East. But, it is the Western theme of the roadside sculpture that is so intriguing. As you drive through this small town that is tucked away in the Wind River Mountains, Bronze cowboys wave to you from strange locations. Along side the highway adjacent to a Cabinet Shop is a bronze drover head 'em West. 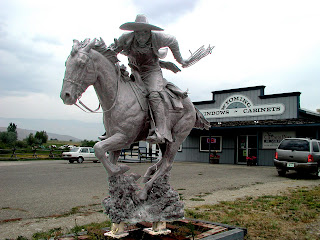 Lander even has a “back lot” where the cattle and cowboys who didn’t make it on stage are “in waiting.” Behind the foundry we found: 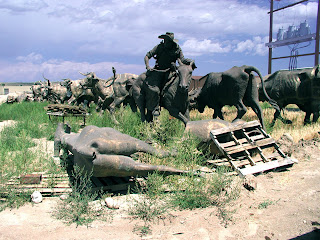 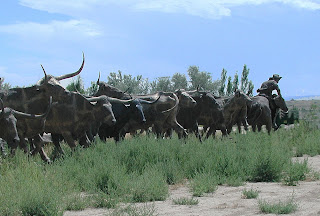 I didn’t really need to go all the way to Lander to see Western Roadside Sculpture. Here in Norman, Oklahoma we are extremely fortunate to have our own foundry, The Crucible Foundry, and our own resident artist, Paul Moore. When Senator David Boren took over as president of the University of Oklahoma in Norman ten years ago, he began to change the cultural landscape of the University, and the town of Norman. Within a couple of years of Boren’s tenure, he managed to convince Paul Moore to move to Norman from Santa Fe, New Mexico. Paul has created many wonderful sculptures in his years as an artist, but probably nothing exists anywhere as ambitions as his "in progress" sculpture of the Oklahoma Land Run of 1889. Now, think about that for just one moment; A sculpture of the Land Run, which includes wagons, horses, and pioneers, all mounted to jump the North Canadian River(renamed Oklahoma River)in Oklahoma City. Like I said this is a work in progress.
First it was the horse: 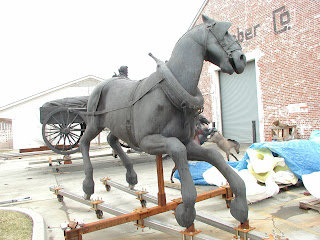 Then the Horse, Wagon and settler. 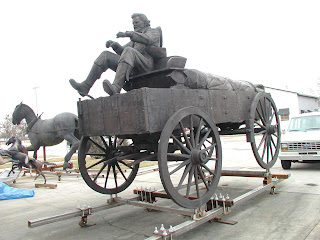 Once each piece is finished, they are put in place along the Oklahoma River in the park in Oklahoma City adjacent to Bricktown, one of the city's most ambitious urban renew projects. Once a warehouse district, today it houses exclusive shops, eaterys and the Bricktown Ball Park. Like San Antonio, a canel runs through Bricktown, where gondolas escort people to various locations. 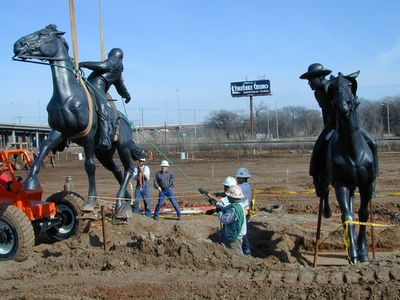 Then A wagon or two: 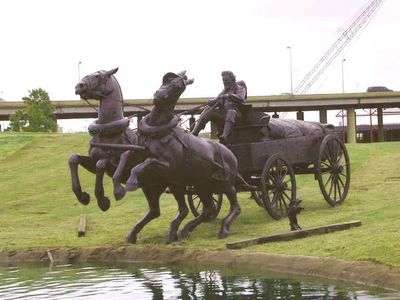 
And eventually a full scene of horses, wagons and settlers posed to make the run for free land in 1889.
Click on image to see larger picture.


Whether in Lander, Wyoming, or Norman, Oklahoma or points in between, Roadside Sculpture has replaced bill boards and neon signs in promoting the American West and western culture. This is truely a wonderful world in which to live.
Posted by sue schrems, Ph.D. at 6:05 AM